Time flies when you’re busy as hell. This seems like a good moment to step back and take stock.

First order of business: a project I worked on won an Ennie! I did the graphic design for Fever Swamp by Luke Gearing, which it was announced last week won Reece Carter’s Judge’s Spotlight award.

Daniel Sell of Melsonian Arts Council dumped a big messy pile of really great ideas into Jarrett Crader (editor) and my laps. It was our job to make those ideas as usable at the table as humanly possible (and make sure the physical object looks, you know, elegant and shit). Both the print and pdf version have gotten great reviews and every review I’ve seen has at least mentioned the part we played. So that whole project feels like a pretty big win for me.

This has all been a validation of my belief that modules like Maze of the Blue Medusa and Blood in the Chocolate have made a pretty big chunk of the scene realize they were starving for intelligent, well-designed supplements, that they can actually use to make running great games easier. The medium of role-playing games is at a similar moment to one that comics went though, when Karen Berger was in charge of DC’s Vertigo imprint. RPGs are officially for grownups now. 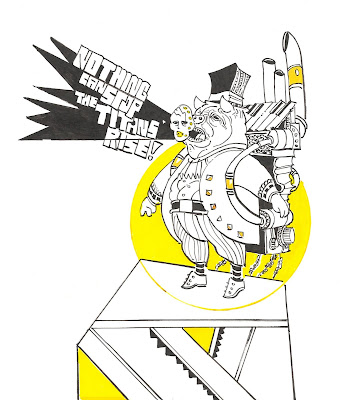 Speaking of Maze, I’m also doing layout on a pretty extensive adventure called Silent Titans, penned by Patrick Stuart and being illustrated by the absurdly talented Dirk Detweiler Leichty who seriously needs to be doing this stuff full time. It’s been pretty slow going because we've been reinventing a few wheels, but holy shit will all this back-and-forth experimentation and refinement be worth it.

And one thing that’s juuuuuuuust about ready to release: Faux Pas, written by Beloch Shrike of Blogs on Tape fame and illustrated by Anxy (plus a couple maps by me,  and it's edited by Jarret Crader). It’s the first issue of a new zine called Hocus. It’d work for a one-shot, but really it’s the sort of module you’d want to slot into a hex on your campaign map, for your players to stumble into when they least expect it. 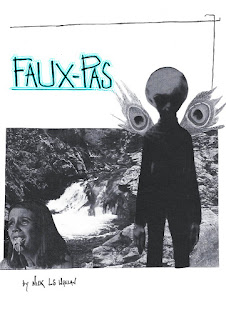 There’s more stuff lined up but it’s way too early to talk about most of it so I’ll just stop now.
Posted by Christian Kessler at 12:00 PM