Some of these apocalypses have been the result of an external cataclysm. The astral body that collided with earth in its early history, forming the moon, could have been more massive, or approached at a slightly different angle, which means that in many timelines, it was, and the Earth was demolished long before it would have become suitable for life as we know it.

Many, many of these Earths were destroyed in the crossfire of wars fought among their own inhabitants. In some of the universes where restraint proved too difficult when it came to nuclear warfare, even those weapons failed to satisfy the wrath of the warlords and generals and presidents and kings. The survivors were forced underground but the war would continue. Sometimes the core of the planet would become part of the battlefield, compromising the Earth’s structure. A few realities produced particularly enterprising and ingenious madmen that managed to trigger a supernova event, destroying their entire solar system.

Even on the Earths that physically survived, mass extinction events were fairly common on most. Each of these massive die-offs cleared the way for another form of life to have its shot. The only hope of any particular genetic strain of surviving one of these events was in producing a species intelligent enough to see the event coming and prevent or escape it (bear in mind that most technologically or magically advanced civilization that the Earths produce also bring about their own extinction, so even if evolution somehow gets that far it’s still a crapshoot).

In some of those realities, the great oxygenation event (when early plants poisoned the world with oxygen, and the rest of life had to adapt to the abundance of this new toxin) happened a few hundred million years earlier, giving cambrian life a longer period in which to develop. The cambrian intelligences that ruled some of those worlds were the first to escape to other Earths, where they lie dormant beneath the oceans, while their cultists on land prepare for their awakening.

On one branch of the world tree (which is a much more apt metaphor for the multiverse than the ancients are likely to have realized), the great permian extinction occurred a hundred million years before it did in ours, greatly extending the length of the mesozoic period, giving the dinosaurs plenty of time to produce a species capable of language and tool use. Great saurian empires rose and fell much as our own have (that is to say, through a tragic history of violence, treachery and greed). Meanwhile, the academically inclined continued to work towards understanding the world around them and adapting it to their own needs. 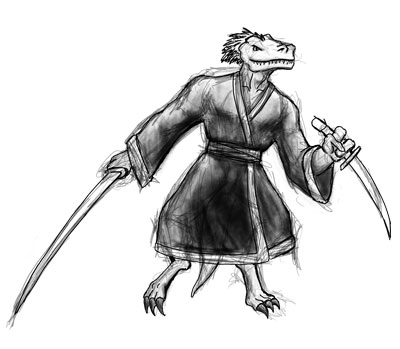 When the saurian astrologers of those worlds recognized impending doom in giant asteroid form, they severed their homeland from their own timeline, expelling the land from its original place in the multiverse. This is how Exodus, the Prodigal Continent, came to be.

This continent, about the size of Australia, would jump to a wildly different shade of reality every year or so, and continues to do so sixty five and a half million years later. It’s been known by many names on uncountable worlds, including Atlantis. Due to the fractal nature of the multiverse, it’s essentially certain that more than one version of Exodus exists, but if more than one has ever appeared in the same world at the same time, the history of their interaction was lost long ago.

Nations and philosophies have risen and fallen on the continent over the course of countless generations. Few saurian philosophers today even remember the traditional world tree model and those who do reject it, perceiving themselves as the one true people, denizens of the one true continent in a constantly shifting universe.

One of the few constants throughout the multiverse is that any civilization which stops thinking of outsiders as real people no longer sees abuse and exploitation of those outsiders as morally wrong. This universal truth, coupled with what the saurians perceived as an outside world that was almost constantly rewriting itself from scratch, has largely shaped the behavior of this species. Generally speaking, any time the saurians themselves aren’t too busy with some internal crisis, they appear in a new world and make contact with the most intelligent ephemerals they can find (as they refer to any species not from their continent), take advantage of them and enslaving as many as possible to support their own extravagant lifestyle.

Bringing up the propagation of these slave races on Exodus and using that as a philosophical counterargument is a good way to be labeled a heretic.

Many of these species revolted and were wiped out, but a few managed to escape, organize, and claim territory. The saurians, who once ruled the entire continent, retreated and unified in the highlands. The lowland regions are littered with the crumbling ruins of their towns and fortresses, and the highlands are home to a federation of saurian city states, having adopted savage humans as their current slave race of choice.

Having been exposed to wildly varying conditions throughout the vast majority of their history, the saurians have become one of the most versatile races in the multiverse. Their adventuring class, the rokai, are responsible for defending what’s left of saurian territory, exploring the various outside worlds looking for opportunities, and maintaining order within the federation’s borders. Rokai are expected to acquaint themselves with the arts of the magician and the swordsman alike, as well as the more practical skills of the scout or thief.

In terms of game mechanics, a level 1 rokai starts with a combination of abilities normally associated with a thief, fighter, or magic user, without excelling in any of those areas. From then on, every time the rokai increases in level, they must decide which of those three classes to advance in.

These stats are for LotFP because that’s more or less what I’m running at the moment, and because I couldn’t give a fuck less about niche protection if I tried. Making it work for another game might require shifting some numbers or adding some abilities depending on the ruleset, but the basic framework is:

Saurians also have the following natural abilities:
Bite attack, 1d4 damage.
Dinosaur affinity (similar to the affinity humans have for dogs and horses).
Scent up to 1/4 mile.
Scales provide natural protection as leather armor.
Posted by Christian Kessler at 10:59 AM No comments:

Quick DMG to the 30 Years War

The 30 Years War was a big complicated mess, in a way that makes it uniquely gameable. It was part of what historians refer to as Europe’s General Crisis, a century-long period of violent political and religious upheaval combined with famine and plague.

It is in no way necessary for a DM to understand all the details of the 17th century political landscape in central Europe in order to run a good game in that setting (although if you happen to enjoy studying history, it certainly wouldn’t hurt), but there are a few major points that could potentially be useful to know when you're coming up with encounters, or when your players start doing things you don't expect.

So here's a quick list of simplified gameables for DMs who haven't got the time or inclination to look into the history themselves. Anyone else probably knows all this. If anyone else is you, feel free to add good stuff I left out in the comments.
Posted by Christian Kessler at 7:15 PM No comments: