I’m just about done writing and laying out my Kellerlabyrinth project, which I’m calling Nice Streets Above, after a song by Wire. The song is an expression of rage generated by upper class pricks. The title is relevant to the adventure both in that sense, and in a purely literal one, as the tunnels beneath the streets are inhabited by refugees and the human parasites. It’s a dungeon and a slum at the same time, and several conspiracies with unique goals and methods are based there.

I can see no reason why horror, science fiction, superhero fiction and fantasy shouldn’t all be the same thing, and NSA reflects that aesthetic. There’s also a little bit of history, which is basically horror anyway. The supers influence shows in some of the choices that PCs may find themselves faced with; the abilities they might gain, and the prices that must be paid.

I’m designing this to be played with any edition of D&D, but mostly with Lamentations of the Flame Princess. NSA is set in the tunnels under Oppenheim during the 30 Years War, so that ruleset is the most obvious fit. It would also be really easy to fit this and Better Than Any Man into the same campaign. I’m not including many stats in NSA though, so it shouldn’t be too hard to convert to whatever RPG rules you prefer. One of these days I wanna try running it with FASERIP and probably also one of the Dr. Who RPGs.

I figured out what to print on the back cover as a teaser. It’s super pretentious and I’m not fucking changing it. Imagine it being read to you by that movie announcer guy:

A war over a decade old.
A city under foreign occupation.
A refugee crisis with no end in sight.
A rebellion brewing beneath the streets.
A privileged society abusing mystic abilities.
A cult of the hopeless and their gods of decay.

Welcome to Oppenheim.
Corruption is power.

And here’s a couple of illustrations, from a page of potentially recurring NPCs. One set of three basically normal humans, and one set of weirdos with secret powers. 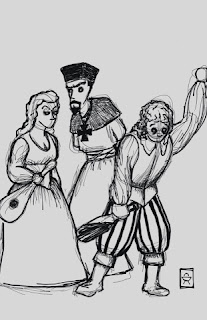 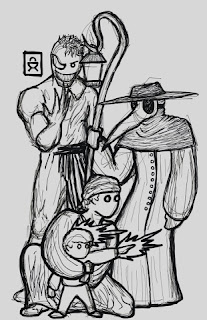 It would be pretty funny if repeating the acronym NSA over and over got me put on a watch list of some sort.
Posted by Christian Kessler at 11:29 AM No comments: